Does a type of Parkinson's medication increase the dementia risk?

Researchers at the University of Nottingham evaluated the cases of a total of 59,769 dementia patients from the central disease registry in the United Kingdom and those of 225,574 statistically similar individuals without dementia diagnosis.

On February 27th 2019, ABC10-News broadcasted a portrait of the project Summit4StemCell. Jennifer Raub, who is the president of the charitable SummitForStemCell Foundation, talks about her Parkinson's disease and the clinical trial of the unique cell replacement therapy, which is close at hand.

In October 2018 in Japan, for the first time in the world, a Parkinson’s patient was treated with reprogrammed stem cells. The man in his 50s was implanted at the University of Kyoto with dopamine progenitor cells, previously extracted from the cell material of an anonymous donor.

A group of Japanese researchers led by Prof. Jun Takahashi at the University of Kyoto has announced that within a month clinical trials with transplantation of so-called IPS cells will start.

According to a publication by the renowned Parkinson’s researchers Bas Bloem and Ray Dorsey, the number of Parkinson’s sufferers will dramatically increase in the next few years – with huge costs and burdens for society.

A team of researchers at the University of Kyoto (Japan) has shown that dopamine neurons grown from human skin grow in the brains of great apes with Parkinson’s disease after transplantation and that their Parkinson’s symptoms are sustainably eased or largely removed.

Looking into the Crystal Ball - the (Possible) Future of Parkinson's Therapies

The 32-year-old Canadian Parkinson patient Benjamin Stecher has published a very well-founded compilation of the (possible) future in the field of ​​Parkinson's therapy research in a blog post.

The scientists Dr. Kathrin Doppler and Prof. Claudia Sommer from Würzburg and Prof. Wolfgang Oertel from Marburg have made an important breakthrough. They have developed a method by which alpha synuclein can be identified in the skin, years before Parkinson’s symptoms become apparent in the patient. The dream of an early-identifiable “bio-marker” and thus early diagnosis of Parkinson’s disease is thus within grasp.

A minimal invasive skin biopsy is carried out for investigation, in which a sample of just 5mm is taken. These samples are then investigated for deposits of alpha synuclein using the so-called double immunofluorescence colouring. If alpha synuclein is present, this indicates with relatively high certainty on the basis of studies to date that the subject will develop Parkinson’s disease in future.

The benefit of early identification like this is that therapies can be started much earlier, e.g. with the Drugs / vaccinations  under development against alpha synuclein deposits. In the ideal case, this could mean that the disease can be identified for example in routine tests before it becomes visible and can be prevented with appropriate drugs or processes.

Furthermore, researchers can observe the course of the disease from a much earlier point so that they can possibly get a better understanding of the causes of the disease and other approached to stopping its progress or even curing its causes can be found.

The results of Doppler, Sommer and Oertl are a great step forward in scientific research into bio-markers / early recognition of Parkinson’s disease. Normally, other researchers must now apply these methods more widely to improve, confirm or (in the less favourable case) reject the chosen procedure and the possible results.

Here are some interesting videos about the " Summit4StemCell" project:

The most important thing in 2 minutes

There is already evidence that there is a connection between altered intestinal flora and the occurrence of Parkinson’s disease. New research results undermine on the one hand assumptions made up to now and on the other hand bring new findings.
A contribution on aerzteblatt.de that is worth reading explains the connections:

There are now three ways to donate to the Förderverein Parkinson-Heilung e.V. without any extra costs: Online shopping via Gooding , WeCanHelp, or Amazon Smile!

How does it work? The participating shops give a percentage commission for your purchase (which would otherwise go, for example, to website operators with banner advertising) to the sponsored institution, in this case the Förderverein Parkinson-healing eV, further.

After Kilimanjaro in Africa and the Mount Everest Base Camp in the Himalaya were climbed in recent years, Machu Picchu in Peru was the next peak that a group of Parkinson’s patients and their supporters conquered this year.

28 Parkinson’s patients and friend/relatives climbed a further prominent mountain peak in Macchu Picchu in Peru to support the Summit4StemCell (S4SC) project. Every participant made a donation him or herself and also gained sponsorship so that a total of over 100.000 US dollars was collected in donations.

The world-leading project for alleviation/cure of Parkinson’s disease based on the body’s own stem cells Summit4StemCell in San Diego, California, is finally receiving funding from the State of California of 2.36 million dollars following a two year application time and delicate negotiations.

Pilot patients are pioneers of a new therapy against Parkinson's disease

This two-part television program describes the Summit4StemCell project and allows two of the pilot patients describe how they will be the first to have dopamine neurons grown from their own skin cells implanted (currently planned for 2019).

This song, by Mitch Faile, who himself is affected by Parkinson’s, explains the symptoms and everyday problems of Parkinson’s sufferers in a humorous way:
https://www.youtube.com/watch?time_continue=3&v=tW6V3z16hpk

Some studies make a link between Parkinson’s disease and an increased likelihood of cancer compared with the total population (see sources). It is however not established that one of the illnesses favours the other or whether certain factors (e.g. pesticides) trigger both. Since conventional cancer therapy for some of the types of cancer occurring disproportionately in Parkinson’s sufferers, e.g. skin cancer, liver cancer or prostate cancer, especially in advanced stages, only have a relatively low success ratio, alternative cancer treatments such as Electro Cancer Therapy are advised, as these have demonstrated significantly higher cure rates in Studies.

Article in Movement Disorders 2010, no

Study on Parkinson's and Cycling

In 2013, researchers at Cleveland University discovered in a study that cycling considerably improves the movement and well-being of Parkinson’s patients.

Summit4StemCell gets an opportunity for funding

The Californian Institute for Regenerative Medicine (CIRM) today requested the Parkinson’s stem cell therapy project Summit4StemCell to submit a funding request at short notice to the extent of $7.3 million. This is to fund the steps still necessary up to the clinical funds. 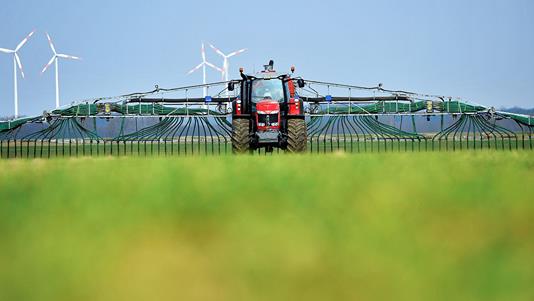 Pesticides could trigger Parkinson's disease according to TV report

On 22.09.2015, the German TV program SWR Odysso reports clearly and compellingly on the ever-clearer link between pesticide burdens, especially in adolescence, and later development of Parkinson’s disease.

Two other active ingredients against increased alpha synucleins, a suspected cause of Parkinson’s disease, developments being funded by the Michael J. Fox Foundation, have entered clinical trials (tests on people).

Scientists at Cambridge University implanted a man with Parkinson’s in his mid-50s with foetal brain stem cells on 18th May 2015. This is the first transplantation of this type after about 20 years.

Researchers at Emory University and the University of California in Los Angeles have established that the coincidence of a certain genetic predisposition and contact with pyrethroids (a certain type of pesticides) are the cause of a malfunction in the human immune system.

The work of Summit4StemCell on the final development and approval of a cell replacement therapy for the alleviation/cure of the motor impairments of Parkinson’s sufferers is going ahead at full steam.

Alpha-Synuclein is one of the body’s own proteins which occurs in higher concentrations in Parkinson’s sufferers, and so probably damages neurons in the brain.

Researchers at the Memorial Sloan Kettering Cancer Center, New York, under the leadership of Prof. Lorenz Studer developed embryo stem cells into dopamine neurons in a recently published study and simultaneously built into them a genetic “switch” through which these cells can then be deactivated with a certain light signal.

The International Stem Cell Corp. (ISCO) based in Carlsbad, California, is planning to carry out a clinical study on implantation of so-called neuronal stem cells in the brains of Parkinson’s patients. The study is to take place in Australia and start as soon as March 2015.

Researchers at the University of Lund in Sweden and MIRCen in Paris have announced that they have succeeded in growing dopamine producing neurons in a focused way from embryonal stem cells. They published their results recently in an article in the specialist journal Cell Stem Cell. According to this, the dopamine neurons (DN) generated from embryonal stem cells (ESC) show a similar potential to the dopamine neurons from human foetuses. After transplantation into the brains of rats, the DN generated from ESC survive a long time, link over long distances with other areas of the brain and re-instate the previously disrupted production and distribution of dopamine. Thus they are very suitable for transplantation into the brains of Parkinson’s patients, in whom the dopamine neurons have largely died off for unexplained reasons.
The researchers are part of the EU-funded projects NeuroStemCell and NeuroStemcellRepair. They hope that the dopamine neurons produced by them with this method will be tested within three years to the extent that they can be used in clinical tests on humans.

The advantage of the method presented by the researchers is that dopamine neurons can be produced for many patients. However, it is a disadvantage that these cells come from another person (embryo) so immuno-suppressant drugs will need to be administered so that the transplantee’s immune system does not kill off the implanted dopamine neurons.

The results from the University of Lund and MIRCen in Paris confirm that dopamine neurons produced from (embryonal or induced-pluripotent) stem cells can be implanted with clear success into the brains of mammals and can effectively heal the damage caused there by Parkinson’s disease very effectively. As they are much more pure than the foetal cells, implanted in the 90s, i.e. have a much higher content of young dopamine neurons ready to network, they are foreseen to lead to significantly faster and further-reaching Healing results than the foetal cells.

Study Director Prof. Malin Parmar explains the research results and their significance in the following video: 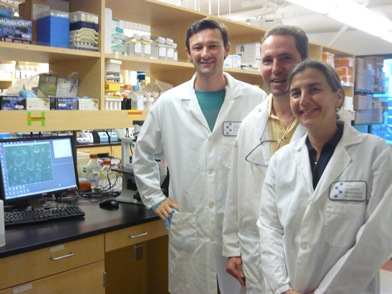 Visit to the Summit4StemCell Laboratory

My wife (Andrea Kußmaul-Riempp) and I visited the research laboratory of the Summit4StemCell project in San Diego on 20.11.2014 as representatives of the Förderverein Parkinson-Heilung e.V. (Association for the Promotion of Parkinson’s Healing).

Our first donations event for funding the project “Summit4StemCell” (more about that here), which is currently developing a therapy method for Parkinson’s through cell transplantation in San Diego, was very successful.

The Wall Street Journal published an extensive article on 6th October 2014 on the transplantations of foetal cells into the brains of Parkinson’s sufferers carried out in the 90s. Amongst other things, this points out that some patients have experienced significant improvements to this day through this method.

Link to the article

The following graphs shows the success of the transplantation of foetal tissue in the dying mid-brain region of two Parkinson’s patients (A and B) in advanced stages of the disease. Both show significantly improved motor skills and were able to discontinue Parkinson’s drugs completely 4 and 5 years after the transplantation!

The healing takes place comparatively slowly, but continuously, over many years. Both patients have a UPDRS motor score after 13 and 16 years respectively of a little over 10 (A) and a little under 10 (B). These are now only slight motor impairments which the lay person would not even notice!

Explanation of the figures:

We would love to hear your feedback via This email address is being protected from spambots. You need JavaScript enabled to view it.